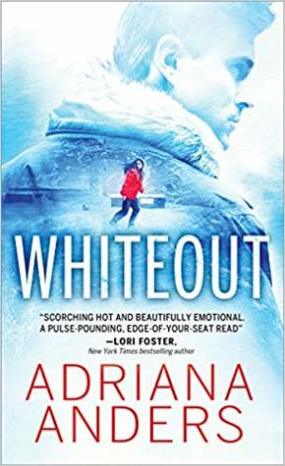 Angel Smith is ready to leave Antarctica for a second chance at life. But on what was meant to be her final day, the research station is attacked. Hunted and scared, she and glaciologist Ford Cooper barely make it out with their lives…only to realize that in a place this remote, there’s nowhere left to run.

Isolated in the middle of a long, frozen winter with a madman at their heels, they must fight to survive in the most inhospitable—and beautiful—place on earth. But the outside world depends on what Ford and Angel know and, as their pursuers close in and their new partnership burns bright and hot, they will stop at nothing to make it out of the cold alive.

Darn, I thought I’d never feel warm again after (finishing) this book. That was one heck of freezing cold premises I read in a while. Even the opening chapter was cold; figuratively and literally. The cover of the book illustrated the general situation perfectly; all those white cold surrounding and the thick red outerwear (our poor MCs wore). I guess I just didn’t expect all those attributed to the protagonists’ braving the element while running (well, skiing, shuffling, walking, or whatever) for their life.

WHITEOUT is an intense and gripping romantic suspense set in Antartica, featuring professional cook Angel Smith and former Army turned glaciologist Ford Cooper. When what started as typical day – and supposed to be last day in Antartica for the cook – turned into a nightmare, Angel’s only ally to escape and to thwart the villain’s nefarious plan was the loner scientist who had been standoffish throughout her summer stay at the station. It’s an excellent setup for a cat and mouse adventure and for the most part it was.

Halfway into the story – just when this reader wondered how the heck these two would get out of this muck they were in – things shifted. And I’m not sure all of those for the best. The multiple POVs allowed plenty of space for backstory of heroes and villains alike, I didn’t begrudge that. But they were not done so well, I felt – sort of like half-cooked attempt at explanations. The book being the first (full novel) of a new series, it came across as a standalone first, then grappling for elements – ANY elements available – to tie (the book) up to the following sequel. I applauded what Anders done to Ford and Angel romance; that’s among the highlight of the book and so did Angel evolving hardened take-no-prisoner attitude after the ordeal she went through. To then not only have the kind of cliffhanger ending but also putting the heroic heroine in that position had me cringing (I mean REALLY, she should have known BETTER).

WHITEOUT is my first Adriana Anders’s book and as I mentioned earlier the first full novel of her new new series “Survival Instincts” – the novella that started this, “Deep Blue,” was part of the multiple authors’ romantic suspense anthology “Turn the Tide.” I admit this book whetted my appetite to dig out the anthology and I guess the cliffhanger ending intrigued me what the sequel would bring. It’s a fifty-fifty chance at this point whether I’d enjoy the turbulence. But hey, WHITEOUT isn’t totally a flop of (reading) experience (to me) so I’m going to give the next book a chance.

Copy of this book is kindly given by the author/publisher via NetGalley in exchange for an honest review.