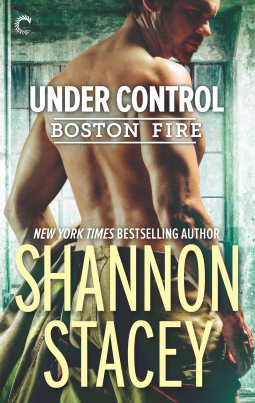 Meet the tough, dedicated men of BOSTON FIRE—and the women who turn their lives upside down

When faced with the opportunity to change shifts while staying in the same house, veteran firefighter Derek Gilman jumps at the chance. His new schedule means not working Saturdays, which means more time to spend with his two kids. His divorce may have been amicable, but being a firefighter and a single dad is a lot to juggle. And when fate brings a gorgeous, wealthy woman into his life, he’s pretty sure he can’t handle more than he already is.

Olivia McGovern loves plans. She planned to start her own business and planned its growth. It’s earning her seven figures now, but her personal life simply doesn’t exist. Getting trapped in a broken elevator figures in exactly nowhere, and freaking out in front of a sexy firefighter definitely isn’t on the agenda. Especially not one with two kids and an ex.

What would have been a random incident with an attractive stranger becomes something more when a charity event brings them back together. They’re from different sides of the tracks, literally—with friends, family and careers to consider. But as Derek and Olivia are discovering, chemistry doesn’t allow for plans, and love doesn’t bother with logistics.

Out of the “Boston Fire” series, I think “Under Control” comes across as a smooth and mature (as in relatable grown-up sense) chronicle of Engine 59 and Ladder 37 crews’ romance. There was barely any ripples in the budding attraction between Derek and Olivia, mostly both characters’ over-thinking and self-doubting the difference between them. Even the people around them didn’t stir trouble or muddy the water for them. I confess to get a bit antsy waiting for some kind of lightning strike, like: come on, there’s got to be some climatic turning point here, right. Just do it already! But nope, the couple proved to be quite the responsible and understanding adults about their life. And just when I began to think they’d get away scotch free the setback struck!

I’m not crazy about the timing and cause of disagreement between Derek and Olivia. The ease with which the whole story built – the pace and plot – screeching to a halt close to the end of the book was unbelievable. The hero and heroine then forced to sprint toward the finishing line while finding some compromise and middle ground to solve their issue and be happy together. After wading through all the difference between them – even unexpected child sickness that was not part of the bargain at that stage, mind you – to have this pair just up and walked away… it sucked!

But let me tell you why this book still works for me: I like the characters. Sometimes it takes no more than acceptable characters for me to enjoy a book. Derek and Olivia were decent persons that I wouldn’t mind to have as friends IRL. The author did implied (in the conversation between the MCs and their friends) that either one was a fine specimen of human being. Heck, most of “Boston Fire” men and women were described as attractive. But both were mere humans who carry baggage that shaped how their view relationship realistically, in their own way. And – despite my huffing and puffing of the swift change and small window Derek and Olivia had to rush through and saving their budding romance – the steps they took about it were sensible, reasonable, and adult thing to do.

“Under Control” is definitely a feel-good read with little to no angst. I think the only gloom that rivaled a blip that Derek and Olivia experienced was set to make way for the next installment in the series; another entry that I really look forward to read.

Advanced copy of this book is kindly given by the author/publisher via NetGalley in exchange for an honest review.